The Centre in 2012: Annual Activity and Management Report 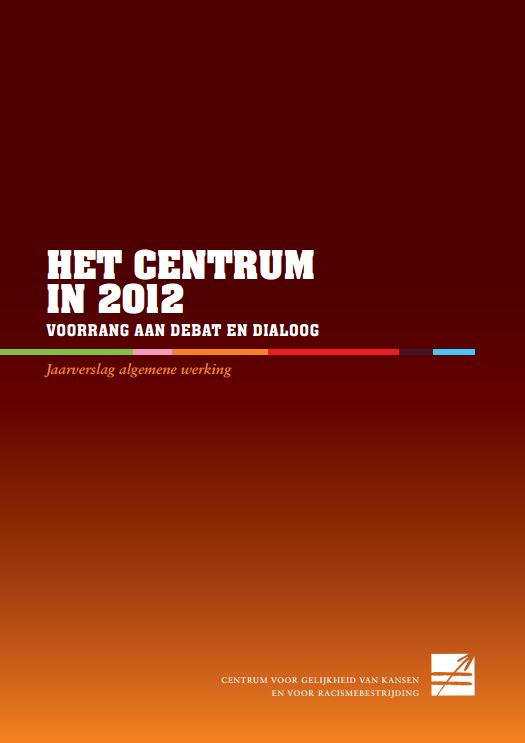 2012 was another very busy year. No fewer than 5,118 people contacted the Centre with a request for information, advice or assistance. In order to give a swift and satisfactory response to each of these questions, we honed the methodology of our approach, without failing to give special attention to the psychological needs of the complainants. Always preferring conciliation, negotiated solutions and alternative measures, the Centre only brought legal action in five cases of discrimination.

The complaints referred to us for investigation often enable us to put our finger on things that are wrong or not going well in our society, and give us the opportunity to take preventive measures. On the one hand, these activities involve training, providing information and raising awareness; in this respect the Centre embarked on new paths in 2012, including e-learning and coaching of organisations, to mention but two. On the other hand, it is also our task to draft opinions and recommendations for better regulations, in the light of surveys and studies (such as the diversity barometer) or the role the Centre often plays as a forum for debate and discussion. The objective here is to bring together various players with a view to making headway on specific problems related to discrimination, diversity, fundamental rights of foreigners, et cetera. In October 2012, the municipal elections presented the opportunity to stress the major role of local decision-makers in the fight against discrimination and in the promotion of equal opportunities and the respect for the fundamental rights of foreigners.

In 2012, we started up the service for the monitoring of the United Nations Convention on the Rights of Persons with Disabilities; a new mission entrusted to us jointly by the federal, regional and community authorities in 2011. A step was thus taken both towards the new interfederal Centre and towards an approach to disability now centred on human rights rather than solely anti-discrimination. The Centre is well aware that the expectations are considerable – a case such as Plopsaland is proof of that – and intends to continue to work with the utmost zeal in an endeavour to make good these expectations.

The Centre has achieved renown not only in Belgium. Indeed, it is also very well-known and much appreciated at international level, further to its active participation in some eight cooperation agreements. The Centre also received numerous international visits in 2012, not only from EU countries, but also from Brazil, Vietnam and Taiwan. Equal opportunities and human rights have been a matter with which the international community has concerned itself from time immemorial, with countries undertaking vis-à-vis each other to place the bar ever higher in this field.

In December 2006, a working group set about the task of converting the Centre into an interfederal institution. A political agreement was concluded to this end between the federal government, the regions and the communities in July 2012. This agreement is structured around four component parts: an interfederal centre for the fight against discrimination, a federal centre for the analysis of migration flows, an interfederal institute for the equality of women and men, and a human rights umbrella organisation. For the time being, the Centre is hoping above all that this political agreement will soon become a reality.

The creation of a new interfederal centre for the fight against discrimination will enable every resident in our country to approach one and the same institution for any request for information, advice or assistance on the subject of discrimination (with the exception of sex discrimination), without having to rack his brains over whether this is a federal, regional or community matter. Due to the fact that all the expertise will be pooled in a single interfederal centre, citizens will also be certain to receive the best possible treatment, and the total cost will only represent a fraction of what it would have been if each authority had created its own separate institution. Meanwhile, the federal centre for the analysis of migration flows will be providing information on migration flows, ensuring respect for the fundamental rights of foreigners, and promoting the fight against human trafficking.

This new structure will mean that the two ‘centres’ should benefit from greater independence and enhanced effectiveness, and the Centre sincerely hopes that the ‘interfederal human rights  umbrella organisation’, which has been promised for so long, soon sees the light of day, since it  should improve harmonisation and coordination of all the human rights mechanisms in place in this country and remedy the shortcomings at which the UN (rightly) continues to point an accusing finger. This will also result in better guarantees as regards the respect for the fundamental rights of every resident of our country, and the more comprehensive and coherent fulfilment of our international commitments.

2013 will therefore not only be the year that sees the Centre celebrate its twentieth anniversary, on 15 February, but also, without doubt, the year of far-reaching structural change.

We hope you enjoy reading this report, which you can download below.